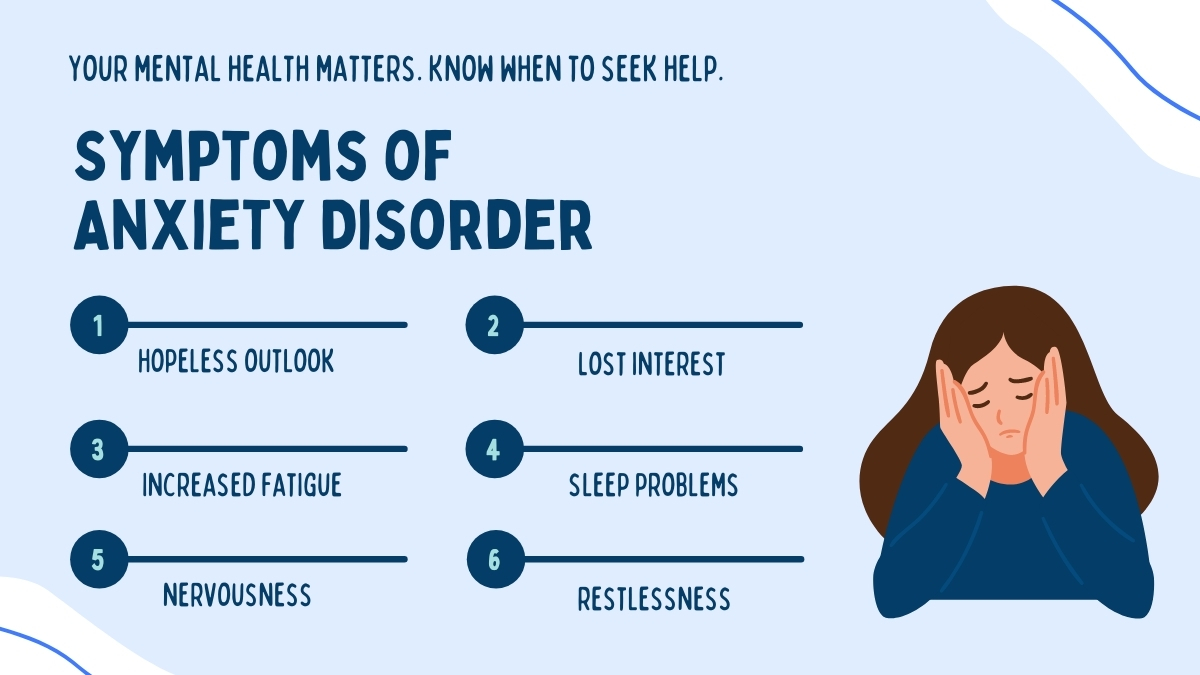 what are the symptoms of depression and anxiety?

According to gender and age, there are some differences in symptoms of depression and anxiety. In men, it usually manifests as tiredness, irritabilit

What Crystal is Good for Motivation?
How to Stop Someone From Having a Panic Attack?
How to get the motivation to lose weight in 2021?

According to gender and age, there are some differences in symptoms of depression and anxiety. In men, it usually manifests as tiredness, irritability, and anger.

They also often do not realize that they are in a state of depression and do not seek help. In young children, depression is more likely to manifest as rejection of school, anxiety about separation from their parents, and worry about the death of their parents.

Depressed teenagers are often irritable, moody, and have trouble in school. They also often suffer from anxiety, eating disorders, or drug abuse.

In older people, depression can manifest in more subtle ways because they are often less likely to admit feelings of sadness or pain. Diseases that are more common in this population can also cause or lead to depression

What’s a good definition of depression?

Depression is a form of mood disorder that causes constant sadness and loss of interest.  Also known as major depression or clinical depression, it affects how you feel, think, and behave, and can cause various emotional and physical problems.

What Are the Main Causes of Depression?

Many things increase the likelihood of depression including Abuse: Physical, sexual, or emotional abuse can make you more susceptible to depression later in life.

Age: Older people have a higher risk of depression. Other factors may make the situation worse, such as living alone and lack of social support.

Some medications: Some medications, such as isotretinoin (used to treat acne), antiviral drugs interferon-α, and corticosteroids, can increase your risk.

The depression of a biologically vulnerable person may be caused by family members or friends’ personal conflicts or disputes cause death or loss:

Cause death or lose confidence

The grief or pain after the death or loss of a loved one, even if it is natural, will increase the risk of depression.

Women are about twice as likely to suffer from depression as men.

No one is sure why.

Hormonal changes experienced by women at different times in their lives may have an impact.

A family history of depression can increase your risk. Depression is considered a complex feature, which means that there may be many different genes, each with a small effect, rather than a single gene that causes disease risk.

the genetics of depression is not as simple as pure genetic diseases such as Huntington’s disease or cystic fibrosis.

The same is true for moving house, loss of job or income, divorce, or retirement. However, clinical depression syndrome is more than just a “normal” response to stressful life events.

Social isolation or expulsion from family or social groups due to other mental illnesses may increase the risk of clinical depression medical conditions.

Almost 30% of people with drug abuse problems also suffer from severe or clinical depression. Even if drugs or alcohol make you feel better temporarily, they can eventually exacerbate depression.

A mood disorder that will affect your overall feelings about life. a common symptom of depression is known as helplessness and hopelessness.

Other feelings may be worthlessness, self-hatred, or inappropriate guilt. Common and recurring thoughts of depression can be expressed as: “It’s all my fault” or “What’s the point?”

Depression can take away the happiness or enjoyment of the things you love. Losing interest or giving up an activity you once wanted—sports, hobbies, or hanging out with friends—is another obvious sign of major depression.

Another area where you might lose interest is sex. Symptoms of major depression include loss of libido and even impotence.

Part of the reason you may stop doing what you like is that you feel very tired. Depression is usually accompanied by lack of energy and extreme fatigue, which may be one of the most debilitating symptoms of depression.

This may cause excessive sleepiness. Depression is also related to insomnia because one can cause the other, and vice versa. They can also make each other worse. Lack of good quality, restful sleep can also cause anxiety.

Although depression has not been proven to cause anxiety, these two conditions often occur at the same time. Symptoms of anxiety may include: nervousness, restlessness, or tension Feelings of danger, panic, or fear

Depression has different effects on gender. Studies have shown that men with depression may experience symptoms such as irritability, risk-taking or evasive behavior, substance abuse, or inappropriate anger. Compared with women, men are also less likely to recognize depression or seek treatment.

What’s a good definition of Anxiety?

It may be caused by events or activities that make you nervous or upset. So Anxiety is the same worry, fear, or discomfort.

Anxiety may be a stress response, but it may also occur in people who have no obvious source of stress. Anxiety and stress can cause physical and mental symptoms.

Everyone feels anxious, restless, and tired, but if you often feel worried, nervous, or nervous, you may suffer from anxiety.

Heart Problems Can Cause Anxiety

If you have ever had a panic attack, you will be familiar with the way your hands become clammy, unable to breathe, and feel the heart beating out of your chest.

Although a panic attack is not a heart attack, there is a relationship between heart problems and anxiety. In fact, according to data from Harvard Health Press, approximately 5% of American adults suffer from Generalized Anxiety Disorder, but those diagnosed with coronary artery disease (11%) or heart failure (13%) have a higher incidence.

According to the Centers for Disease Control and Prevention (CDC), anxiety may occur after a heart attack, stroke, or heart failure. Heart rate and blood pressure, blood flow to the heart decreases, and cortisol (stress hormone) levels increase; the CDC says that all of these can lead to heart problems over time.

There is a strong link between alcohol and anxiety. Studies have shown that people with anxiety disorders are two to three times more likely than the general population to have drug and alcohol problems at some stage in their lives.

But that’s not all:

According to the American Anxiety and Depression Association (ADAA), alcohol and drugs often cause panic attacks. In particular, people with a social anxiety disorder may turn to alcohol to relieve symptoms, but alcohol actually worsens anxiety.

ADAA points out that about 20% of people with a social anxiety disorder also suffer from alcohol or substance use disorders. No matter which problem comes first, the combination of drugs, alcohol, and anxiety will form a vicious circle.

Caffeine and Anxiety Make You Feel Jittery and Nervous

Caffeine is a stimulant, which may be bad news for people with anxiety disorders. The stressful effect of caffeine on your body is similar to a terrorist event.

This is because caffeine stimulates your “fight or flight” response, and studies have shown that this can increase anxiety and even cause anxiety.

Although caffeine can improve alertness, attention, and cognitive function, other studies have shown that excessive intake can increase anxiety, especially in people with panic disorder and social anxiety disorder.

Just like anxiety symptoms, drinking too much coffee can make you feel nervous and moody, and it can make you sleepless at night.

Medications Can Trigger an Anxiety Attack

Certain drugs have unpleasant side effects and may cause anxiety symptoms or anxiety attacks. Prescription drugs to be aware of include thyroid drugs and asthma drugs, and over-the-counter decongestants are known to cause anxiety in some people.

If you suddenly stop taking certain medications that are sometimes used to treat anxiety, such as benzodiazepines, withdrawal can cause additional anxiety.

Weight Loss Supplements Can cause Anxiety

Many over-the-counter (OTC) weight loss supplements have side effects that cause anxiety. Using St. John’s Wort can cause insomnia, and green tea extract (claimed to suppress appetite) contains a lot of caffeine.

Guarana is an ingredient in some over-the-counter weight loss products, and its caffeine content is four times that of coffee beans.

Be careful with any products that contain ephedra, as it can cause increased heart rate and anxiety. The US Food and Drug Administration (FDA) banned the sale of dietary supplements containing ephedra in 2004.